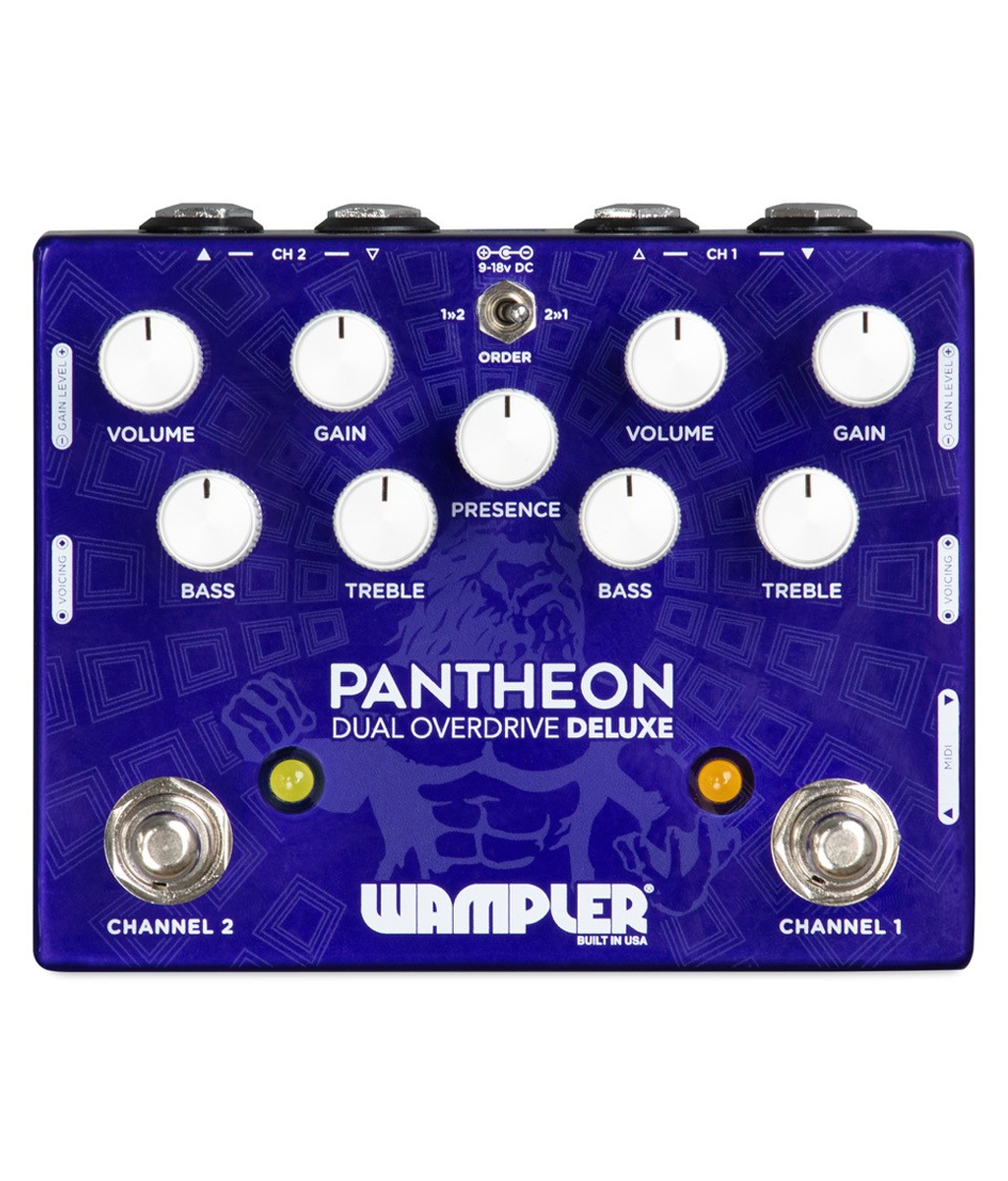 From Wampler:
The now legendary Wampler Pantheon provided a unique interpretation of the classic “Blues Breaker” style stomp box, by capturing all the tonal nuance of the original, but with added flexibility and style. In doing so, it found its way onto thousands of pedalboards across the world. Enter the new Pantheon Deluxe – a dual overdrive pedal that takes this evolution several steps further by offering a flexible design with two completely independent Pantheon circuits, one voiced as a classic blues breaker and one with a more modern boutique sound. This palace of tone delivers a staggering 200 combinations of gain settings, featuring dual Inputs and Outputs, and for the first time ever, Wampler have added MIDI channel switching to one of their gain pedals.

The Pantheon Deluxe lets you dial in two channels of organic creamy gain, gritty overdrive, or heavy distortion while retaining Wampler’s famous ease of use and flexibility. Channel 1 delivers a classic Blues Breaker tone, Channel 2 is a recreation of the original Pantheon, a similar circuit to the Blues Breaker but with a modern boutique feel. Independent side mounted Voicing and Gain Level switches allow you to further shape your tone to perfection.

The Pantheon Deluxe lets you dial in two channels of organic creamy gain, gritty overdrive, or heavy distortion while retaining Wampler’s famous ease of use and flexibility. Channel 1 delivers a classic Blues Breaker tone, Channel 2 is a recreation of the original Pantheon, a similar circuit to the Blues Breaker but with a modern boutique feel.

Each Channel of the Pantheon Deluxe Dual Overdrive feature independent Gain, Level, Treble, and Bass controls to enhance the shaping of your tone. The Baxandall-style active Bass control is neutral at noon but boasts an extremely powerful sweep as you move through the range. A single global Presence control simultaneously alters each channel to add just the right amount of top-end chime to suit different guitars and amplifiers – perfect for when playing live or when in the studio.

With the addition of MIDI In and Out, you can now also switch the analog channels of each circuit on and off with a MIDI switcher – saving you valuable hardware loops on your loop switcher. With dual analog inputs and outputs, you can split both channels in a loop switcher, insert pedals between each side, or run in stereo.

Brian Wampler’s attention to detail and commitment to bringing you the best-sounding & most usable Effects Boxes on the market is nothing new. Those qualities are on full display within the Pantheon Overdrive. We’re all tone-freaks, and we’re always trying new things, but we hope this pedal finds its forever home on your pedalboard, so we built it to last that long.