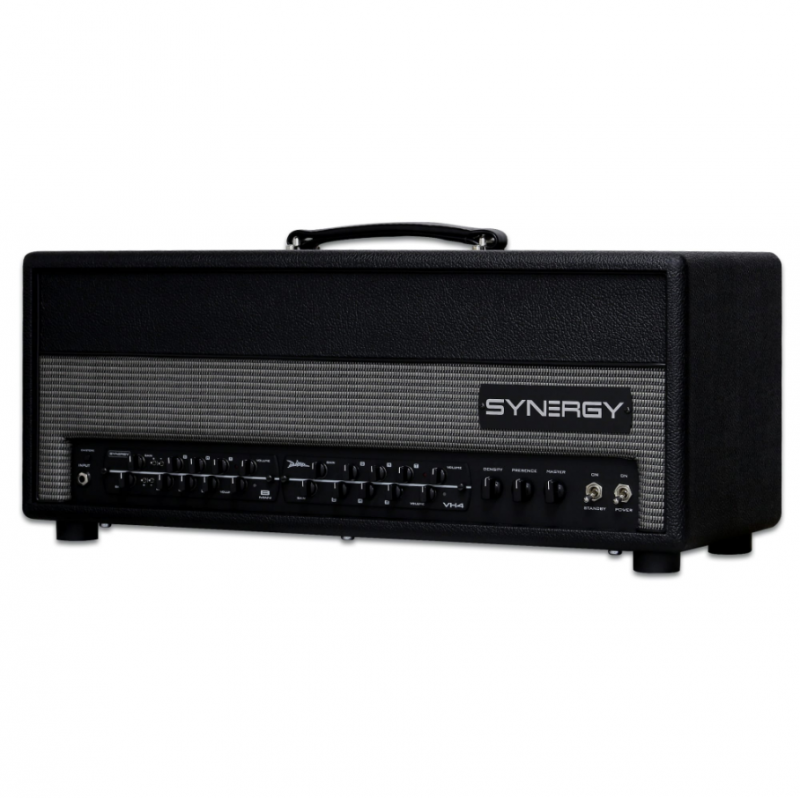 If you want the power of the Synergy platform but prefer to stay with a straightforward, tube amp-based rig, the SYN-50 Dual Module 50W All-tube Head is for you. Based around an 6L6 power section, the SYN-50 is capable of singing with the best amps out there. The head boasts docks for two of our Synergy preamp modules, adding up to four footswitchable channels that have been voiced by some of the most legendary amp designers in the business. And while the SYN-50 is as easy to use as any amp head, it boasts immaculate cabinet simulated direct output, MIDI programming, and a transparent effects loop that makes it as useful in the home studio as it is screaming through an arena.

50 WATTS OF ALL TUBE POWER

There’s simply nothing like the feeling and sound of a tube amplifier moving air behind you. That’s why we put our Synergy preamp module technology into the 50-watt, all-tube SYN-50 amp head. With docks for two of our preamp modules, you’re able to outfit this head with four channels of boutique-quality tone. And while the three 12AX7s and an 6L6-based power section push the sound of the modules through your favorite cabinet, the amp’s  global Presence, Density, and Master controls shape its overall character. The SYN-50 brings together classic tube amp performance with the modern flexibility you demand.

A NEW STANDARD IN TONAL FLEXIBILITY

With two docks for our Synergy preamp modules, the SYN-50 tube amp head offers up to four programmable channels that can be selected on the fly. Try the T/DLX and Diezel VH4 modules to go from California cleans to ferocious high-gain. Or maybe you’d prefer to pair our Morgan AC and Friedman BE modules for various shades of British-style chime and crunch. And swapping the modules couldn’t be easier. Simply loosen the thumbscrews and change out the module for a different tone. With the SYN-50, you’ll have the power and tones of Friedman, Morgan, Soldano, and more at your beck and call.

AUTO SENSING
The SYN50 features a patent pending technology that “senses” which preamp modules are being installed into it. Once a module is detected, the SYN30 adjusts the cathode biasing circuitry on the built in 12AX7 tube, to best match the original amplifier channel design on which it’s based

With so much tonal power and so many sonic options onboard the SYN-50, we made sure to offer you two flexible ways to control it. The Synergy 4F 4-button foot controller is essentially a fully programmable MIDI controller. From the factory the four buttons recall the channels on your preamp modules. But with a simple procedure, you’re able to program the pedal to your needs. If that still isn’t enough, the Dual Module 50W All-tube Head is fully MIDI capable. And because it accepts both 5- and 7- pin connectors, it works with almost every MIDI controller out there.

● Included 4-button, programmable footswitch
● Can be controlled via most MIDI controllers
● MIDI Thru allows you to command multiple units at once
● Intuitive programming

Synergy hardware and interchangeable pre-amps are protected under US patent.

Input, Channel/Store switch (toggles between the channels of the Synergy preamp modules, or is used to store midi assignments), global Density, Presence and Volume. When storing a MIDI command, press down the channel select switch until the LEDs on the Synergy Preamp channels blink, indicating a program change has been accepted.

MIDI IN and Thru (can also be used with a 4 button midi footswitch for channel switching) with MIDI channel select, Speaker Outputs, Impedance Switch, XLR DI output with Level, Ground Lift and Cab-Sim Bypass switches; FX Send and Return with a level switch.

There are no reviews yet.